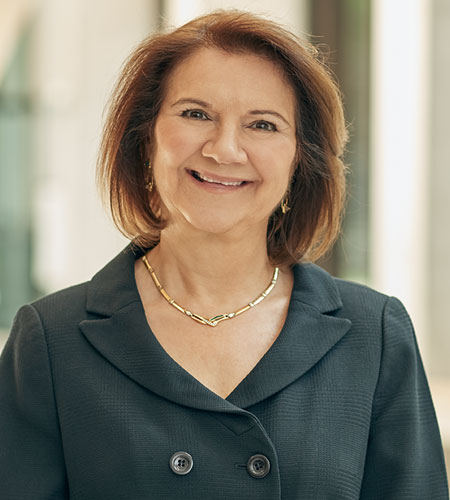 Cristina Amon is the Alumni Distinguished Professor in Mechanical & Industrial Engineering, and the Institute of Biomaterials & Biomedical Engineering. She is the former Dean (2006-2019) of the University of Toronto’s Faculty of Applied Science & Engineering. As Dean, she was responsible for the strategic and visionary leadership of one of the world’s most distinguished Engineering Faculties, the administration of over 750 faculty, researchers and staff and the education of more than 8,000 undergraduate and graduate students. Under her leadership, Canada’s top-ranked engineering school has become a global hub for interdisciplinary research and education, known for its strategic Faculty-wide initiatives, cross-Faculty centres and institutes, partnerships with industry, and innovative undergraduate and graduate programming.

Before joining U of T Engineering in 2006, Amon was the Raymond J. Lane Distinguished Professor and Director of the Institute for Complex Engineered Systems (ICES) at Carnegie Mellon University. As Director of ICES, she conceived and led interdisciplinary research initiatives, seeded high-impact projects, fostered a culture of innovation and promoted strong interactions with industry.

A pioneer in the development of Computational Fluid Dynamics for formulating and addressing thermal design challenges subject to multidisciplinary competing constraints, Professor Amon’s innovative research includes thermal-fluid transport projects with applications to concurrent thermal management for electronics and electric vehicles, optimization algorithms for renewable energy, nanoscale transport in semiconductors, biomedical devices and biological systems. Multi-scale numerical approaches range from nanoscale Molecular Dynamics and DFT to Boltzmann Transport and Navier-Stokes, bridging to machine learning. In the area of computational modelling of biomedical systems and devices, her team focusses on simulation methodologies for biomechanics, the human cardiovascular and respiratory systems and their pathologies with emphasis on clinically relevant applications. She has contributed over 400 refereed articles to the education and research literature.

An ICD.D, she has served as director and adviser on boards in Canada and abroad and is a licensed Professional Engineer in Ontario. Professor Amon has undertaken leadership responsibilities in professional societies, government committees and conference activities. Highlights of her activities include founding chair of the Global Engineering Dean Council (GEDC), chair of the research committee of NCDEAS (National Council of Deans of Engineering and Applied Science in Canada), chair of the premier conferences in thermal management and packaging (IEEE ITherm and ASME InterPACK), and member of the Mitacs Research Council. Her editorship roles include the ASME Journal of Heat Transfer, IEEE Transactions on Components and Packaging Technology, and Heat and Mass Transfer.

Cristina Amon has received numerous recognitions and awards, including the ASME Gustus Larson Memorial Award, the ASEE Westinghouse Medal and the ASME Heat Transfer Memorial Award. She was recognized as one of Canada’s Most Influential Women, received the YWCA Toronto Woman of Distinction Award, and was honoured with the Society of Women Engineers’ highest honour for outstanding contributions to engineering over more than 20 years. She received the 2017 Sir John Kennedy Medal, the highest recognition of the Engineering Institute of Canada, and was awarded the 2015 PEO Gold Medal, Ontario’s most prestigious honour for engineering public service, technical excellence and professional leadership. She is an elected fellow of all major professional societies in her field, and has been inducted into the Canadian Academy of Engineering, Spanish Royal Academy, U.S. National Academy of Engineering and Royal Society of Canada.

Born in Uruguay, Dr. Amon earned her Mechanical Engineering degree from Simon Bolivar University in Venezuela, and her M.S. and Sc.D. from the Massachusetts Institute of Technology in 1988.